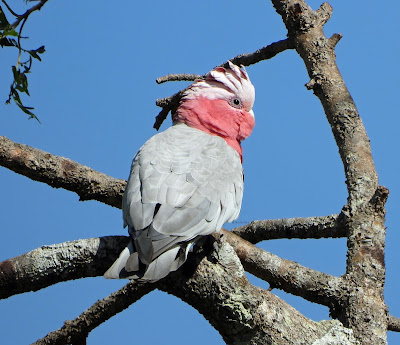 I was heading home from Maleny Precinct a couple of weeks ago and spotted a couple of galahs in some almost dead trees along the way... 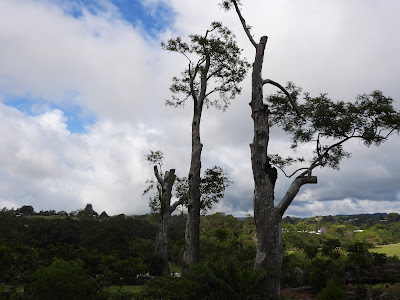 so stopped for a closer look because it'd been a while since I'd seen any galahs. They were checking out the middle tree at the time. 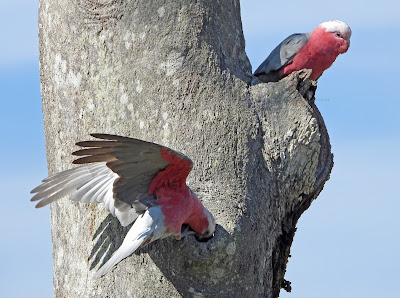 I realised they were looking for a nesting spot around the back of the tree... 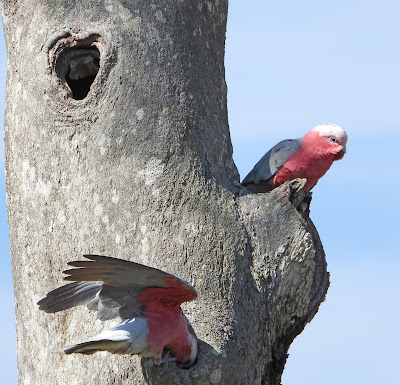 Noticing the heart shaped hole in the tree later I thought it was a shame these love birds weren't looking at that as a potential nest. Perhaps someone else had already put down a deposit... 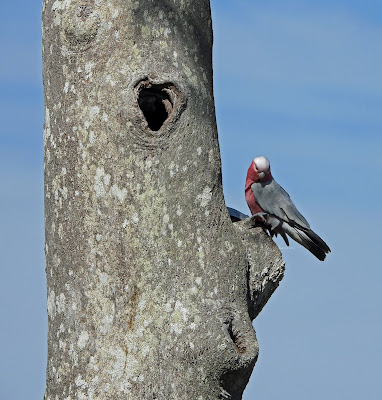 How fitting would that have been? 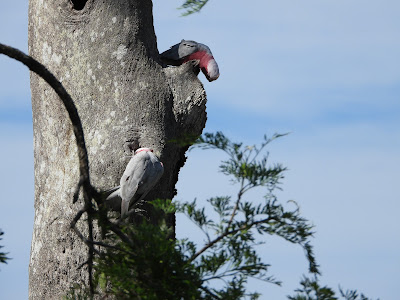 Not sure if the bird trying to enlarge that small hole is the male. They were too far away to check the eye colour (female's having a pink iris) but it seemed like one was urging the other to try harder. They flew off shortly after, perhaps deciding against that bit of real estate.
Posted by sandyiamg at 23.10.21 No comments:

It was very entertaining watching these two platypus navigate the small cascade. The first and larger animal is a female (bald spot on the tail). When the two come together in the last 3 videos (sorry about that, file was too large to put up as one video here for some reason), they disappeared for about 20 minutes before coming back down.  Probably a tunnel under there where they were exploring or probably mating. The water was so clear that week we could watch them swimming underwater quite easily.
So fast I almost lost sight of her then I thought she'd disappeared under that rock...
This time I was ready for her to swim back out...
Sorry about the audible gasp and loud commentary... pretty exciting.
And they continue...
They came out around 20 mins later...
Such clear water...
Posted by sandyiamg at 26.9.21 No comments:

I thought I'd post a few videos of some of the wildlife I see nearly every day. Often I take a video because it's too hard to get a still due to the amount of foliage or the swiftness of the subject or I think others might be interested in hearing what bird it is they hear but don't see. The behaviour of the creature is also of interest.
Here, two spotted doves were canoodling but I thought it interesting that the ?female? was clearly irritated towards the end.
This is a rakali, or water rat, Australia's answer to the otter. Fascinating to watch but so quick any still photography I've tried has been blurry.
Two new nestling willie wagtails visible for a short time when the parents changed over. Just hope this pair do better than the last few attempts at raising a family, due to weather or predation.
I heard this guy, male leaden flycatcher, long before I spotted him and then, too late, realised there was a female just above him which I missed.
Two fledging welcome swallows wait for their parent to literally drop their food into their mouths. I had to slow down part of it because the parent is so fast. A few days later, I saw the 'drop and swallow' being done on the wing. The parent does a fly past and the fledglings fly up to meet them where the food is exchanged. I haven't managed a video of that yet unfortunately.
Eastern whipbirds are so frustrating. They can be in a shrub right beside you but you can't see them to photograph. They love the gloom of the undergrowth so I took a video of this one foraging instead.
Azure kingfishers are so quick when they dive for their food, I'm in awe of people who publish photographs of them. I've taken lots of them sitting, watching and have managed a few videos of the dive. This one shows the freshwater prawn it caught too.
Always a thrill to see platypus reacting with others as they're normally a solo animal. I've posted videos of them interacting with cormorants previously but here is part of the mating ritual. Normally the male will grasp the female's tail and it's a bit of a chase before the actual mating happens but here he's missed the tail and has her rear foot.
A neighbour alerted me to a large python in her yard so out I went with my camera to capture the action. I was pretty close to it and fascinating to watch it move.
I'd heard this bird for a couple of years before I actually saw one so videoed it so others would know what they hear. 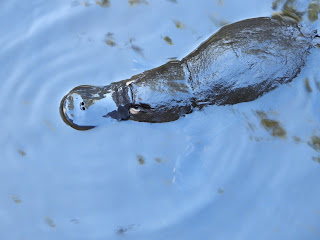 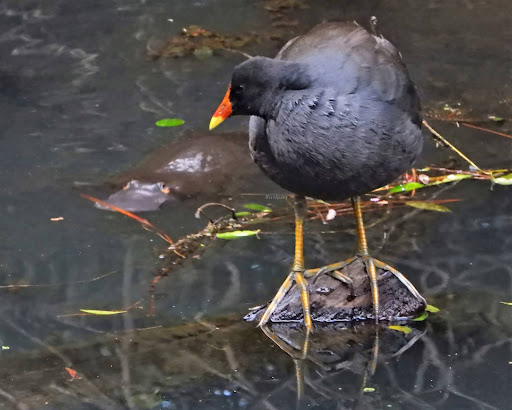 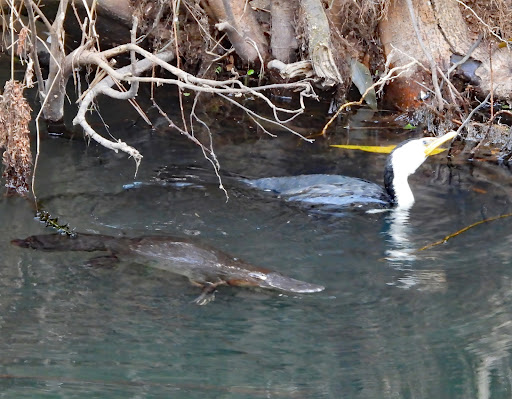 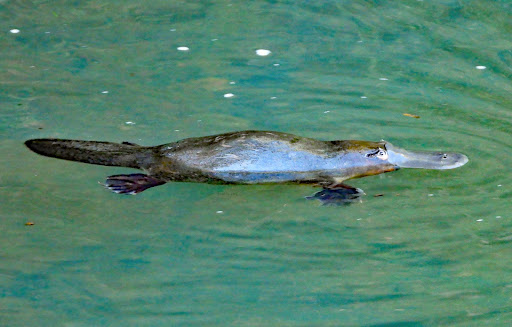 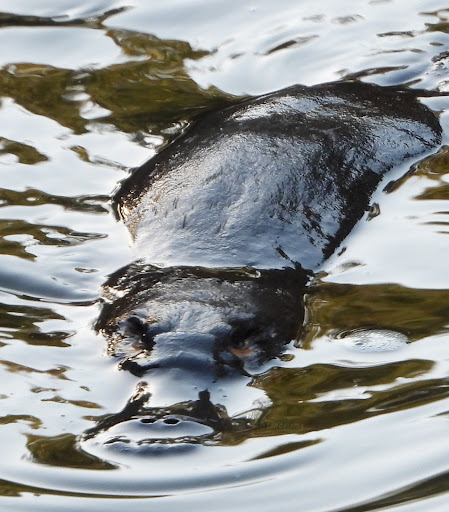 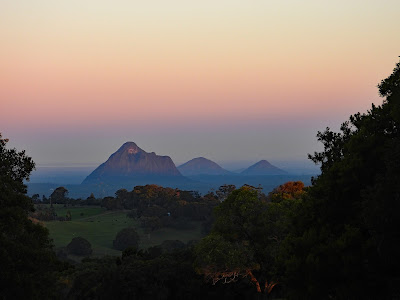 Last night I enjoyed a lunar eclipse at Howell Knob Lookout near Maleny. Although perhaps 'enjoyed' isn't quite the right word; endured maybe, although it was exciting too. By the time I left, I'd been standing for over four and a half hours having forgotten to take a chair. Duh! It's a great spot for stargazing at any time. Even the Glasshouse Mountains were waiting... 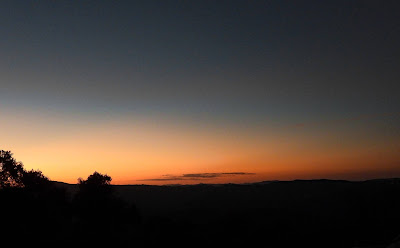 With everyone watching for the moon, the sun slipped away without much fanfare. 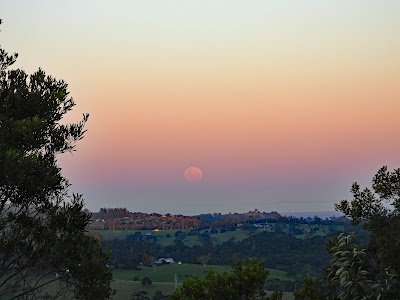 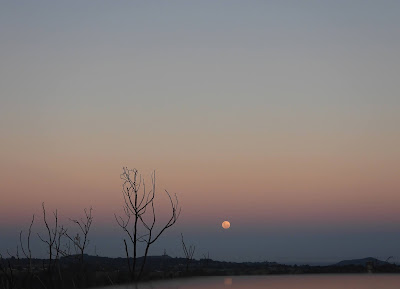 so it was already up by the time I found a good spot for a snap. 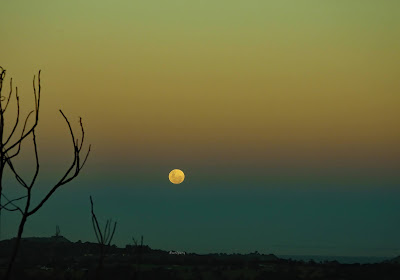 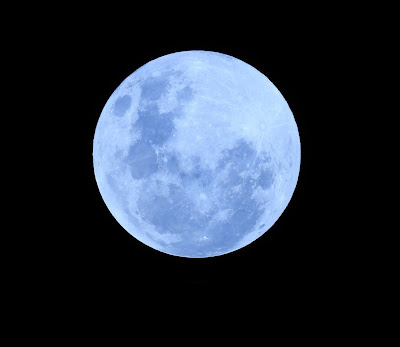 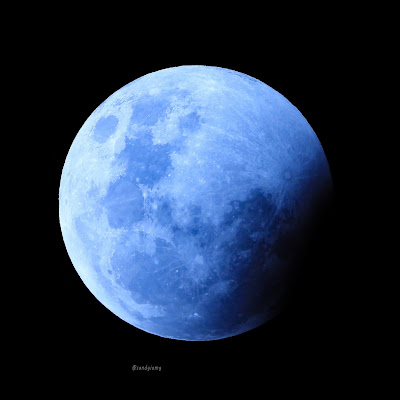 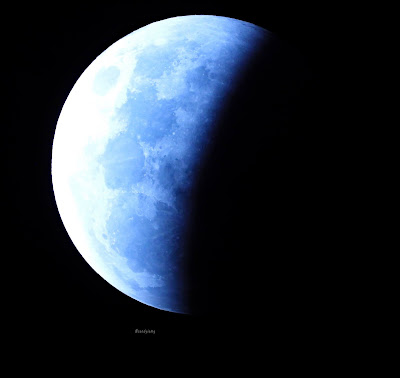 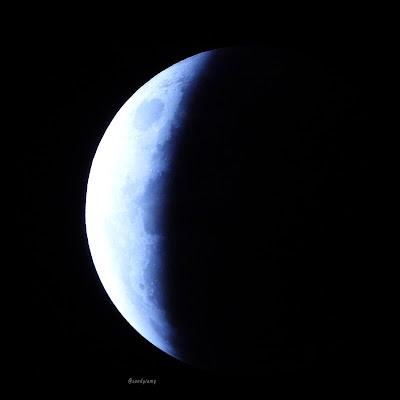 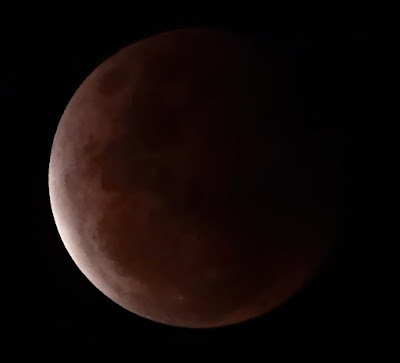 Ta dah!!
I didn't think I'd be able to get a photo of the total eclipse due to the low light but somehow managed this so happy enough. 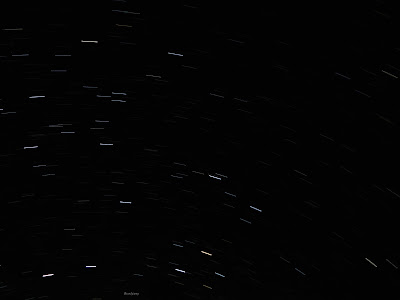 I amused myself by trying for a star trail which turned out pretty well for a first effort and even saw a falling star (as opposed to a shooting star) which I thought could have been from someone flushing the loo in the aircraft flying over at the same time! I didn't wish on that star in case it was crap. :D 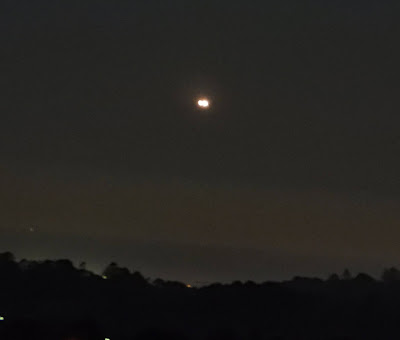 UFO? It was hovering around for ages but I just couldn't focus on it. Doo doo do do :D
***
I left the Lookout almost straight after the total eclipse (figuring it would be just the same thing in reverse) but I was very cold despite wearing thermals, beanie, scarf and gloves and partaking of hot tea.
Posted by sandyiamg at 27.5.21 No comments:

This blog is to be a fun journal of things that we two sisters have found, or will find, interesting enough to photograph.

We thought it would be a great visual recording of some of the beauty in this world, seen through our eyes.
If you would like to join us on this journey, we would be happy to have you along. We’d love your comments or a quick reaction check.

Sometimes we have no idea who or what our subject is, but loved it well enough to shoot it. Feel free to educate us if you will.

Some of our fav blogs...

That's us with our mum.

Pam on the left, Sandy in the middle (courtesy Kylie Gillis Photography) .